The Romans (among others!) wrote in wax with a stylus; the wax was embedded in boards, which were bound together in pairs. If a Roman were to place clay between these boards, could they make a copy of their wax tablet in the clay?

It strikes me as remarkable that coins were minted so long before books were printed—though I guess the motivation behind minting coins and printing books are rather different.

I gave a talk in the Farb and Friends Student Seminar (back in March!) on [1].

This is an awesome paper—well-worth a few words on every blog!

The construction is way easier than you might think. The ingredients:

Let for a subcomplex of ; we think of this as decomposing into pieces resembling a simplex.

Now the construction is easy: replace each simplex in with a corresponding piece of . Or more formally, build the fiber product of and over ; this fiber product is denoted by in the paper. From this, we get a natural map .

The vague upshot is this: features of translate into features of , while nonetheless preserving features of . Here are a couple of examples of how assumptions on lead to consequence for .

Solutions to Lights Out

I’ll briefly introduce the Lights Out puzzle: the game is played on an n-by-n grid of buttons which, when pressed, toggle between a lit and unlit state. The twist is that toggling a light also toggles the state of its neighbors (above, below, right, left—although, on the boundary, lights have fewer neighbors). All the buttons are lit when the game begins, and the goal is to turn all the lights off.

There are two key observations:

As a result, the order in which we press the buttons is irrelevant. So to solve the n-by-n puzzle, we just need to know whether a button needs to be pressed. My old website had some pictures I made showing solutions for boards of various sizes—pictures where a white pixel meant “press” and a black pixel meant “don’t press.” I assembled these pictures into a video, showing solutions to the Lights Out puzzle for :

For as cool as that looks, there’s not much to be discovered (as far as I can tell) from watching these frames flash by. But it does look like about half the buttons have to be pressed to solve the puzzle: why is that?

The still frames of the movie are available here as PNGs in a zipped archive. Here is a solution to the 400-by-400 board: 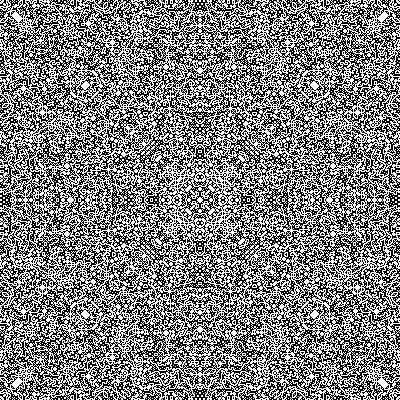 Finding that solution involved row-reducing a -by- matrix—that’s a matrix with over 25 billion entries. On the other hand, each entry is one bit, so that matrix fits (not coincidentally) in 3 gigabytes of memory. One could surely do better, considering how sparse the matrix is: perhaps we could have a little contest for solving very large Lights Out games.

Besides the fact that all these pictures look awesome, Lights Out is a neat example to motivate some linear algebra over a finite field. It illustrates how satisfying an “easy” local condition (each light must be turned off) might require a globally complicated solution—a lesson for mathematics and for life!

I made a movie recently for my advisor. The movie is so pretty, that I thought I’d share it here: may I present to you randomly drawn dots, where two dots are the same color when they touch!

I’ll be a bit more explicit: a dot is drawn at a random location; if it does not overlap any previous dots, it gets a new color. Otherwise, the dot takes the color of the component it touches. Sometimes a new dot connects many components, and in this case, the new component takes on the color of the largest among the old components.

There’s a lot of neat questions to be asked about such a process: for instance, after drawing n dots, how many components should we expect to see? As you can see in the movie, when you draw only a few dots, most of those dots are isolated and have their own color; but after drawing a ridiculously large number of dots, they are all connected and the same color. And inbetween, something more interesting happens.

Here’s an example of “something more interesting” taken from a larger picture than the above movie: 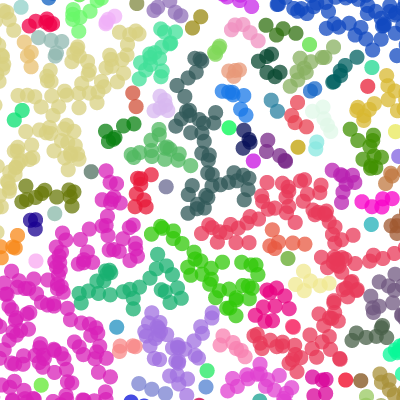 In this fun paper [1] it is pointed out that

and so a very basic question is: what sequences of abelian groups are the homology groups of a closed simply connected manifold?

Anyway, I was wondering: is this realization question solvable for homology with coefficients in or ?

I’m again applying Granger causality to time series data from Intrade. This time, however, I connect box A to box B with a

Running the algorithm on the market data since January 1, 2008 with a lag of two days produces the following graph: 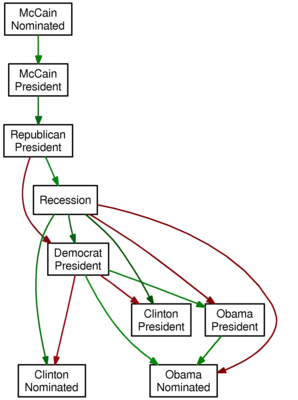 And so, we see that the market data is encoding some

It’s amazing to me (and hopefully also to you) that the relationships between the prices of these Intrade contracts manages to encode popular sentiments.

There’s a library for the statistical package R to do the Granger test, and Intrade produces CSV market data. I fed the market data for various contracts since January 1, 2008 into R, and the output of that into GraphViz to make a nice-looking visualization; in particular, I connect to if Granger-causes with -value less than 0.05. Darker arrows have smaller -values. This is all an embarassing misuse of statistics and -values, but it is quick and easy to do, and the results are fun to see. 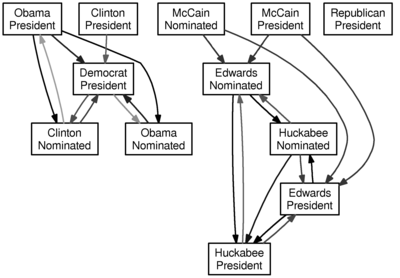 Here is the graph for a lag of two days (i.e., can the two previous days of data for be used to forecast the next day of data for ): 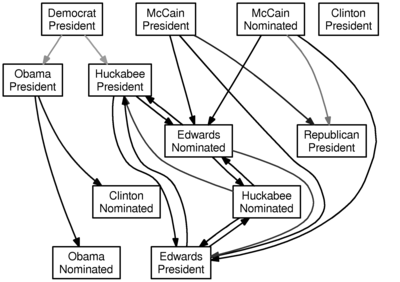 And here is the graph for a lag of three days: 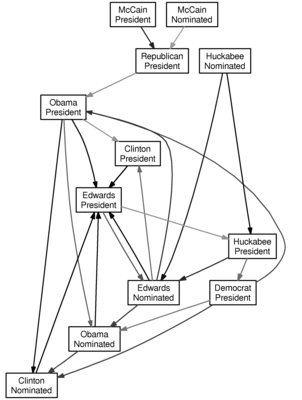 Don’t take this too seriously. And one word of warning: an arrow from to does not mean that if is more likely, then is more likely—rather, it ought to mean that past knowledge of can be used to forecast . I suppose it would be interesting to add some color for the direction of the relationship, and maybe I’ll do that when I have another free hour.

Movies of some neat cubical complexes.

In particular is a torus in , and here is a movie of it spinning:

I’m particularly fond of this, as you can really see that four squares are coming together at each vertex (hence, it has zero curvature), and you can see the hole in the torus as it spins.

The complex is a genus five surface in , and here is a movie of it spinning:

I represented the extra dimensions with color—not that it helps much!

Books that are useless on a desert island.

Drew Hevle raises a very interesting question: suppose you are stranded on a desert island; what books would be entirely useless in this situation?

Here are a few books that I wouldn’t want to be stranded on an island with:

Do you have other ideas for awful desert island reading?

Anyway, the graph is huge; and the usual visualization tool (Graphviz) doesn’t work particularly well on the whole graph, so I took a few hundred vertices around pine, apple, sauce, pan, and cake. The result was the following: 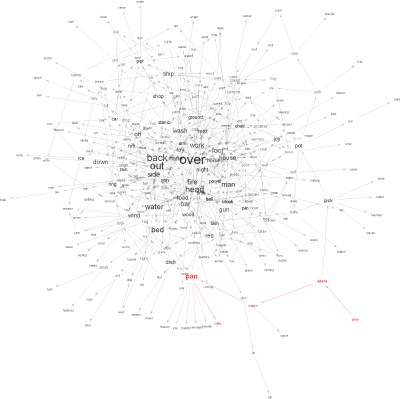